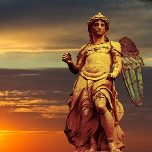 In this recording you will learn more about Archangel Michael and a few of his historical appearances in Mystical France. The speakers help you to explore special places of power and significance to Archangel Michael especially Mont St. Michel in Normandy France, where Michael has appeared on several occasions over the last 800-1,200 years. Also included is a short talk on the Archangel’s appearances and messages to Joan of Arc. In addition, Rev. Ana Jones shares some present day messages she has received in her relationship with Archangel Michael as a modern mystic.

This recording ends with a short guided meditation for invoking Michael for further protection and support in your life.

Also at the end of each recording is a pre-retreat travelogue focusing on the details about Phillip & Ana’s upcoming retreats in Mystical France this Fall of 2014. All teleconference recordings in this Mystical France series are FREE and available to the general public.
Speakers & Questing Spirit Retreat Leaders are : Phillip Jones & Rev. Ana Jones.
For more information go to: www.MysticalFrance.com